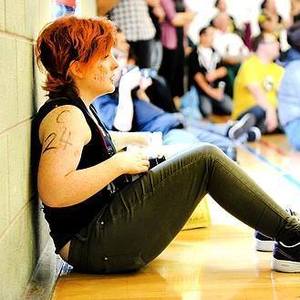 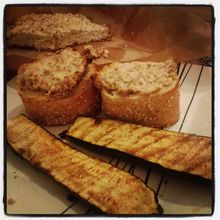 My vegan cheese I made from almonds :D

Let's start with the begining of my meat free life, which was sparked by various events during my childhood. The first was the realisation that I loved animals and did not wish to exploit them in any way. The second was researching the industry and realising how incredibly cruel it was. I remember being completely traumatised by an article on the fur trade, instantly deciding that I knew enough to abstain from meat. Because I was so affected by the evidence of cruelty in the industry I took the option of an 'ignorance is bliss' approach meaning I did not read into it any further, trying to take comfort in the fact I was    doing my bit.

About a year ago I stumbled upon some vegan blogs my friend posted, These included information on the dairy industry that I was incredibly sad to discover was just as, if not more cruel, than the meat industry. It took no more than a couple of pictures and video's of battery farming, 'veal' calves and cows hooked up to milking machines to cut all animal products from my life. I found eating vegan a very easy transition, I also bought new shoes and made sure my clothes weren't wool or silk and I have always used lush for toiletries, however the thing I didn't find easy was people's reactions.

When I became vegan I did not realise that it had become part of an 'eat clean' fad and found myself being asked "Oh so you've gone vegan also?" by people who had temporarily cut meat and dairy out of their lives. I didn't really agree with the word vegan being associated with a health choice or detox like paleo as I believe it is an important life choice based on the principle of living cruelty free. I naturally have a healthy appetite (As in a eat a lot and I also love my greens!) and would rather cook a chickpea tagine over eating soya burgers anyday but I felt I needed to prove it wasn't a health choice just by eating vegan junk food.

I also became vegan at the same time as the horse meat scandal, I remember a lot of vegetarians saying "Aren't all corpses the same if they're for consumption" and erm, being on their high horses (Sorry) about it. I didn't agree, not only do I find it speciest but I also am a supporter of human rights as well as animal rights (These can be most difficult to juggle) and I think everyone should be correctly informed what they're putting in their bodies. I remember trying to voice my opinion and being informed that it wasn't a conversation for vegans. Oh. Eating out has also become more difficult and friends often complain that we can't eat in the same places anymore. Colleagues often offer me sweets and chocolate with dairy and gelatine in and rarely understand what I look for in the ingredients. Let's also not forget the notorious protein questions usually from the kind of people who turn their nose up at your quinoa salad lunch saying "oh that's too healthy for me!

So to summarise I did find the decision personally easy in so many ways, it's the reactions and questions you need to be prepared for. There is a stigma attached to vegans and it's hard to shake, why can't we just all be seen as individuals with similar beliefs.