The psychology of the 'meat-free' sausage 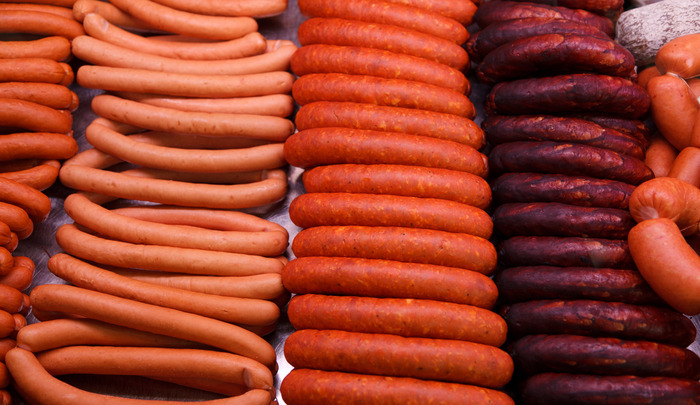 Sausages - predestined for the bbq

We’ve been really lucky, in a way, to enjoy such an explosion in the ‘meat-free-but-meat-like’ veggie market. Twenty years ago, there wasn’t nearly such a range of alternatives. Now, you can get Quorn®, soya, tempeh, seitan and pulses presented in all manner of meat-like guises: the steak strip, the tofurkey, the fakin bacon. And each one has been carefully treated, processed and packaged to have a similar texture, shape, even seasoning, to its fleshy alter-ego. Being a vegetarian who has childhood memories of the ‘real thing’, these products are actually quite appealing. They are easy to cook, they are a nice obvious centerpiece to a meal, and, in my opinion, taste even better than meat. (Plus all that other stuff about low impact on the environment, and general moral-worthiness attached to meat-avoidance).

But, I’ve moved on from meat now. I know how to prepare lentils and pulses, and I’ve almost got my head around silken tofu. Vegetarian food is absolutely and undoubtedly wonderful food in it’s own right, so why is it so often sold as an apology for meat? A veggie sausage is not an alternative to a pork sausage – it’s just a completely different thing. In the same way that carob is in no way a substitute for chocolate. Like carob or not, anyone who’s tasted it knows that they only thing it’s got in common with chocolate is the colour brown.

So these burgeoning meat-free, dairy-free industries are a bit of a puzzle. Can’t we just reclaim the vegetarian sausage, and call it something totally different? Hey, if it’s not a sausage, then it doesn’t even need to be shaped like a tube. Just imagine the possibilities… We could make ‘seitan stars’! We could invent an entirely new vocabulary for our veg-based proteins! But before we mortgage the house and risk-all on these exciting business ventures, let’s try to understand the meat-free industry a little better, because there clearly is a market there. What can psychology tell us about the vegetarian sausage?

The research on this seems to reach a number of general conclusions. First off, people are, by and large, ‘food neophobic.’ This means that we’re generally suspicious of new and unusual foods, and have a tendency to stick to what we’re familiar with. Most of us live in societies used to meat-based diets, and these meat-free alternatives make up only 1-2% of the meat market, so there is a drive to make them seem familiar rather than new. As one researcher says: “new meat substitutes should have a certain resemblance to meat in order to replace meat on the plate.”

Second, we’re really affected by the colour, appearance and shape of food. Aesthetics have a big affect on how things taste, because we form deep psychological associations between the look and flavor of a food. Take the artificial orange food dye out of Cheetos, for example, and they no longer taste like cheese. So, if vegetarian proteins look bland and shapeless, they are probably going to be unattractive to our palate. A sausage-tube or a steak-shape looks tasty (to most of us) because of that strong association between appearance and flavor, and the meat-free market can ride on that association.

Third, meat has traditionally played an important part in the social aspect of meals, and some of those values remain with us today. We still associate meat with social gatherings and family get-togethers; with honouring our dinner guests; with culinary pride and kitchen skills, and with social status. So there is a perception, however bonkers, that vegetables alone won’t cut it. And that is another savvy reason to use veg protein to mimic meat.

With this in mind, there’s one final point to make about veggie sausages. It’s not just strict vegetarians and vegans who eat them, in fact it seems pretty likely that the market is largely made up of people who are ‘meat reducers’, but still eat meat. These people are probably the most affected by the psychological similarities to meat, and wouldn’t be nearly so tempted by our ‘seitan stars’. Apology or not, the stuff is simply more appealing if it looks like a sausage.

Seems there is a place for those short cylindrical tubes, after all.

Thanks for interesting input. I listen to the podcast Food for Thought by Colleen Patrick-Goudreau and in one episode she is talking about how we should start defining what everybody really is eating in order to take back words like sausage, milk, butter etc. For example now the norm is cows milk, meat sausages, dariy based butter and if one eat something else it is thought of and at worst even called things like milk substitute and fake meat. So start to call everything by its proper name instead, for example I only drink vegetable based milk (like soya, almond, coconut) and not milk from animals (like cow, goat, buffalo)", "no thanks I dont eat sausage made of pig, I will eat a sasuage made of soya", "oh you are bbq-ing a cows steak today, Im going grill a lovley seitan steak instead :)".