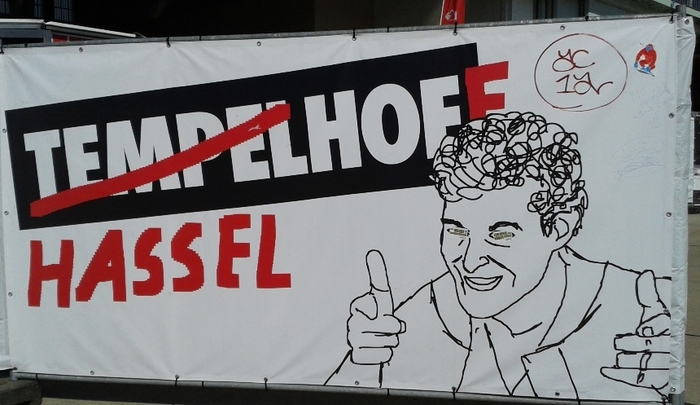 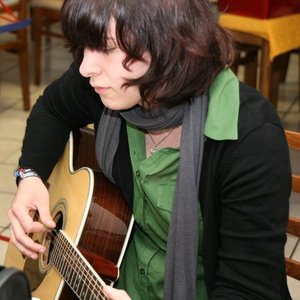 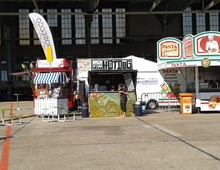 Ah, Berlin, I always enjoy my stays in this city. There is so much to discover! This time it would be the Berlinfestival, which takes place at a very interesting location: Berlin Tempelhof Airport, closed down in 2008.

We entered through the security check and then descended the stairs to the manoeuvring area, where the main stage and several food and merchandise stands were located. As it was lunchtime, we decided to get something to eat first. It was not surprising that the range of vegetarian and vegan food was pleasantly widespread, for Berlin is known for its large vegan community. You could get almost anything your veggie heart (or rather stomach) desired, for example, vegan hot dogs, cheeseburgers, wraps, etc. So before the beginning of the festival, we went for the good old Falafel (they even had vegan sesame sauce) and later on grabbed a cheeseburger, which I enjoyed far more than the ones I consumed during my carnivorous past.

I recall that the prices were fairly reasonable, although I have to admit that I didn’t compare them to the other food stands like “Dampfschwein” (pulled pork), which was strategically well placed next to a “vegetarisch-in-berlin” (vegetarian in Berlin) stand. It was veggie paradise compared to another festival I attended recently in a different part of Germany. We were exhausted and hungry after the show. The only stand that had food left sold “chili con carne”. I was glad to see they also offered “chili sin carne”. But then I found myself staring in disbelief at the prices. The meat version was 3.50 €, which is absolutely fine; the vegan version, however, cost 5.50 €. A friend of mine commented: “Ah, right, because the tofu needs more tending to than the animals?!” ‘Nuff said. Have you had similar experiences at events?

Now, let's turn to the "volcanic" part of the Veggie Paradise. Our motivation to travel to Berlin for the festival was to see Björk! One of my all time favourite artists! Shortly before she entered the stage, we managed to grab front row spots. And then the magic began. Alright, it is a matter of taste. Either you like her or you don’t. In case you're familiar with her music: she played classics like “Army of me”, “Hyperballad”, “Hunter”, “Hidden Place”; and I was especially delighted to hear “Pagan Poetry” and “Jóga”. She looked like a dandelion in her greenish dress and spiky headpiece. Nevertheless, the highlight of her show, for me, was “Náttúra”. The performance of the song was accompanied by volcanic eruptions shown on screens and spectacular pyro effects. Björk may not be vegetarian but she supports the protection of the Icelandic environment. “Náttúra” was named after an environmental preservation campaign, to which all proceeds of the single are donated.